China, Sichuan people. Childhood love of art，The U.S.，Du significantly College,Platt College of Arts and Interior Design Division,Master of Arts，The arts under the tutelage of various，Young children learn such as Japan Togo painting, painting was on passage from Peng Ming, now thanks to Professor Zhou Shixin Xi ink. Flower paintings and work with writing，Landscape heavy charm. Any 1999-2001 Vancouver Chinese Artists Association president. His works have been exhibited in many U.S. and Canada. 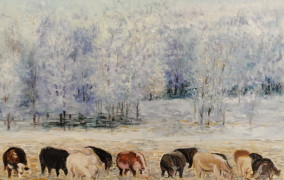